Overview. Amman Civil Airport (IATA: ADJ, ICAO: OJAM) (Arabic: مطار عمان المدني, commonly known as Marka Civil Airport, is an unscheduled airport located in Marka district, Greater Amman Municipality, Jordan, some 5 km (3.1 mi; 2.7 NM) north-east of Amman city center. After being the city's main airport from 1950 until 1983, there are no scheduled commercial passenger flights at the airport anymore. However, it still serves as Amman's main airport for general aviation, and moreover as an aviation education and training hub, and also sees freight operations. It serves as the home base for Arab Wings and Jordan International Air Cargo.

Runway Use. 24 is the runway usually used since it is the only one that has an ILS (Instrument Landing System) however, a visual or RNAV approach can be conducted at runway 06.

Transponder use on Ground. Traffic should squawk their assigned code and turn the transponder on when entering the departure runway.

Scenery. Amman-Marka has some add-on sceneries that can be used by pilots. Default sceneries might have some wrong/missing taxiways and stands.

Charts. Charts can be accessed from several providers on the internet.

Uncontrolled Operations. When POSCON ATC is offline, the following frequencies should be used:

NOTE: No ATIS in OJAM. 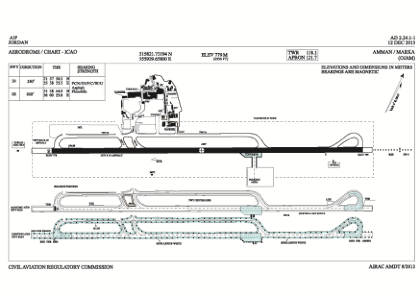 Start-up Clearances. Aircraft should squawk their designated code and ask for start-up. ATC might give taxi instructions with the start-up clearance since all stands don't require push-back.

General Aviation. GA flights are certainly the only type done at the civil part of the airport. Most of the parking spots are reserved for GA jets.

Pushback and Startup. Stands at OJAM do not require push-back since it's a straight taxi-out procedure. When ready, request start up from ATC, when completed, taxi can be requested.

Taxi Procedures. Traffic usually exit the ramp and use either A1 if departure is at runway 24, A2 for 06 departures.

Initial climb for all SIDs from OJAM is FL150.

Arrival Routes. All ACFT landing at OJAM shall expect radar vectors to the final approach path.

Speed Restrictions. Unless approved by ATC, all aircraft below 10,000FT shall not exceed 250 KTS IAS.

Missed Approaches. Traffic are required to maintain runway heading and climb up to 6,000FT unless instructed by ATC.

Clearing the runway. All ACFT landing should vacate the runway ASAP and pilots should inform ATC if unable.

ATC Procedures. Amman TMA has a lot of restricted areas and high terrain around the airport so pilots shall, at all times, follow ATC procedures.