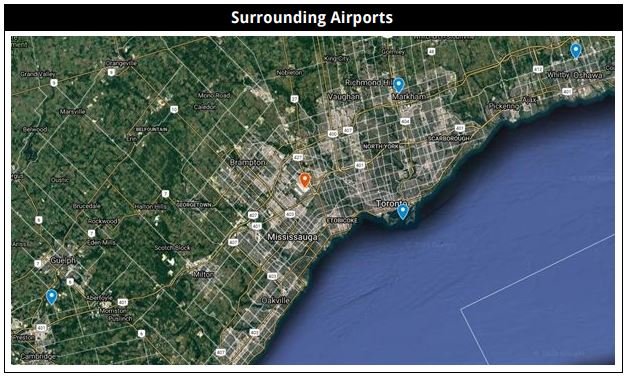 The following have been recognized as common errors made by pilots while operating into and out of Pearson:

➢ Failure to comply with published SID and pilots initiate turns on departure.

➢ Climbing above the initial altitude published on the SID chart.

➢ Failure to understand and comply with taxi instructions.

➢ Failure to file the valid Prop or Jet SID depending on your aircraft type.

There are multiple add-on sceneries available for Pearson. If using FSX/P3D, we strongly recommend that you download one because they incorporate recent taxiway changes that are not included in the default scenery. If you decide to fly with scenery not included in the approved list, then make every effort to follow the controllers’ instructions referencing the published taxiway diagrams.

Runway selection is primarily based on wind direction with the main runways being 05/23 and 06L/24R (or 06R/24L for dual operations). Runways 06L/24R & 06R/24L or 15L/33R & 15R/33L cannot be used for dual dedicated operations due to their proximity to each other; however, they can be used in an alternating “one depart one land” method.

The following frequencies should be utilized only when POSCON ATC is offline:

General Aviation. GA is located north of the airport.

Flight Planning. RNAV SIDS must be used where the aircraft is RNAV capable, unless on a positioning flight.

Pre-Departure Clearances (PDC). Call for clearance 15 minutes before start up.

Pushback and Startup. Clearance to push and start must be obtained from Apron ATC.

Taxiways. Ensure you note down your assigned holding point and taxi route to prevent disruption of sequencing as many taxiways cross runways.

Expediting. Listen intently for takeoff instructions. Once you receive takeoff clearance, you are expected to depart immediately. Slow moving traffic often requires ATC to alter operations which can result in delays.

Noise Abatement. Maintain a climb gradient of at least 4 degrees on runway heading until advised to turn by ATC at a minimum of 3,600 feet MSL. Turns only permitted after intersection MALTN for departures on runway 33L/33R. Early turns only allowed for non-jet aircraft when advised by ATC.

Noise Abatement. All turns to final should be completed at or above 4,000 feet MSL during curfew hours of 23:00-06:00 local. Must maintain a glide slope of 3 degrees.

Arrival Routes. Pearson has 10 STARs and 5 arrival routes depending on the direction aircraft are arriving from. Aircraft that are not on STARs will be given vectors by ATC to conform to the same STAR track.

Speed Restrictions. Between leaving the STAR exit point/hold and turning on final, you will be required to maintain a speed between 210 and 220 knots. Aim to establish on the ILS at a speed between 120 and 180 knots.

Noise Abatement. Aim to use continuous descent, low power and low drag where possible, subject to compliance with ATC instructions and safe operation of the aircraft. Maintain an altitude as high as practicable. Do not descend below 3000 feet MSL before intercepting the glideslope and do not descend below the profile once established. If not under ILS guidance, maintain two reds and two whites on the PAPI.

Missed Approaches. All missed approaches are approved to climb to 3,000 feet MSL while maintaining runway heading.

Clearing the Runway. Vacate the runway as soon as it is safe to do so to avoid aircraft being sent around. Ensure that the tail is clear of the holding point before stopping. Once vacated hold short and await further instructions.

Transponder. Once on stand, set the transponder code to 2000 before switching it off.