The POSCON Pilot Client is an X-Plane plugin that connects the simulator to the Positive Control Network. Once you have logged in to the network the plugin will send information about your plane’s location, altitude, attitude, as well as a number of the plane’s parameters such as gear and flap deployment, engine RPM, state of various beacon and navigation lights, transponder mode and code, etc.

The plugin also receives similar information from the network about aircraft that are within a 50 nautical mile range of your plane. This information is used to draw 3D models of the aircraft at their correct position and orientation. The information is also used to populate the X-Plane multi-player datarefs so that your aircraft’s TCAS system will be aware of nearby planes.

The Pilot Client is installed through the POSCON Launcher. After starting the Launcher go the settings menu and set the path to X-Plane root folder. Then go to the Library tab and click on the X-Plane Pilot Client icon to install the client.

Prior to connecting to the network the first time you may wish to review the default pilot client settings, See the Settings section of this user guide to learn how to choose your desired audio devices and Push-To_talk switch.

The POSCON network relies on your simulator representing an accurate ground speed. In X-plane 11 there are two conditions under which your simulated ground speed will be inaccurate:

The POSCON X-Plane client will monitor each of the above two conditions and will automatically Ghost your aircraft should either of them occur. After you connect to the POSCON network or after Un-Ghosting, the X-Plane pilot client will begin monitoring your frame rate for one minute. This duration allows the simulator to settle in on an average frame rate. After one minute the client will continue to average your frame over the previous 1,800 frames. If the average of the last 1,800 frames drops below 20 FPS you will be Ghosted. The client also monitors the ground speed multiplier after the one minute settle in period. If the ground speed multiplier is any value other one you will be Ghosted

There are a number of FPS Lua scripts that automatically adjust X-Plane rendering settings when your FPS fall below a target setting. For X-Plane we recommend 3jFPS-wizard11. You can down load the script here:

For X-Plane 10 we recommend 3jFPS-wizard. You can download it here:

We suggest running these scripts with a target FPS of 30 frames per second.

If you still wish to use an Autospeed Lua script as an extra measure to ensure an accurate ground speed we have provided an enhanced version in the POSCON\Lua folder. This script does the same thing as the original Autospeed script except that it has a tighter integration with the Pilot Client. As long as you leave the script in auto mode while you are logged into the network then you will not be ghosted due to a low average FPS as the script will dynamically adjust your ground speed. However, if you take it out of auto mode or manually increase the ground speed then you will be subject to the ghosting rules regarding maintaining an average FPS above 20.

You can install the POSCON Autospeed Lua script by copying the script from the POSCON\Lua folder to your FlyWithLua\Scripts folder and restarting X-Plane or requesting that FlyWithLua reload all the scripts.

You can adjust the settings of the Pilot Client by accessing the POSCON/Settings menu item. The following figure shows the items that can be adjusted: 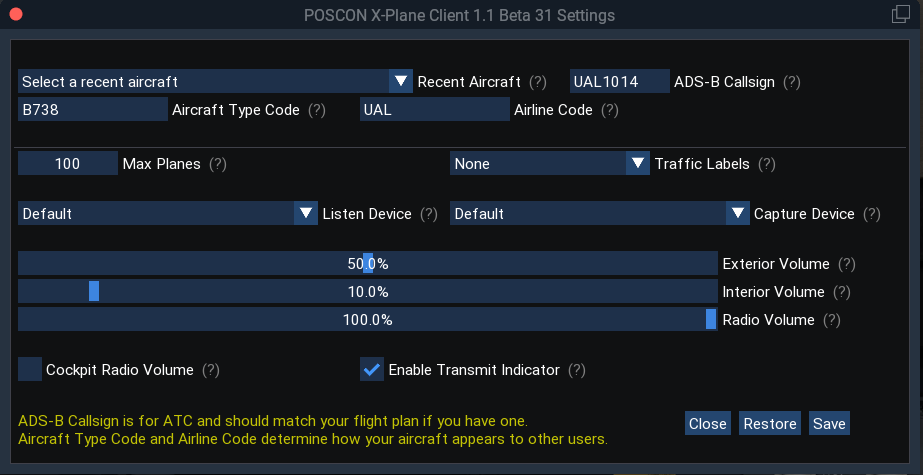 The Pilot Client supports voice communication over the POSCON network.

You can configure a Push-To-Talk (PTT) command to either a keyboard key or a joystick button. Use the X-Plane keyboard or joystick configuration UI to map the POSCON PTT function.

The Pilot Client will send any frequency changes on COM 1 or COM2 to the voice client. The Pilot Client will also send audio panel changes to the voice client. This includes changing the transmit radio as well as enabling listening on COM1 and COM2. Integration with X-Plane requires that your aircraft be properly supporting the common X-Plane datarefs for the radios. It also means that you need to have the audio panel setup properly. As an example, the mic selected for the radio you want to transmit on and the audio monitor selected for the radios you want to monitor.

Some aircraft do not have a visual means to change which radio you are transmitting on. If you are flying an aircraft that has this limitation you can still adjust which radio is being used for transmitting by mapping keys or joystick buttons to the following two X-Plane commands:

If you encounter an aircraft that does not accurately model the audio panel by properly maintaining the above datarefs please let the aircraft designer know about the problem. For your convenience we have incorporated a command that will toggle between transmitting on COM1 and COM2:

The toggle command simply executes one of the two built-in X-Plane transmit_audio_com(x) based on the state of the audio_com_selection dataref.

Ghost mode allows you to see other POSCON traffic and hear their radio transmissions but you will not be able to transmit and your aircraft will not be rendered in other member’s simulators. You will still show up on the Live Map.

You can enter Ghost mode manually using the menu or the command:

You can also be Ghosted automatically under a number of different conditions. When you are automatically Ghosted you will get a pop-up message indicating the reason.

When you are in Ghost mode you can request to be unghosted via the menu or using the command: