Positive Control set out with the goal of designing the most realistic air traffic control simulation available. In keeping with that goal, we began by rethinking how our client software would interact with our server software. In the real-world, the processing power for these systems typically comes from a central mainframe computer located at each air traffic control facility. Radar workstations used by air traffic controllers consist of human controllable interfaces that allow users to send commands and receive responses from the mainframe computer system.

Initially, we have chosen to focus on developing ERAM or En Route Automation Modernization, which is the interface used to control enroute air traffic in the United States of America. Future development efforts will focus around the following:

The above is POSCON's tentative internal development roadmap, but it assumes that no other opportunities present themselves. We are more than happy to interview new developers that are interested in developing their own radar systems as well. Please email [email protected]poscon.net if you are capable of assisting.

Generally, assume that any missing functionality is known to developers. Any functionality that is described in this manual, but is not working as intended should be reported via the Support Center. In the event of a crash-to-desktop or other bug, please create a support ticket. Make sure to be as thorough as possible in your report including detailed steps to reproduce the issue.

The Radar Client produces two log files which we will need to debug any reported issue. Please locate the these two files by navigating to AppData\Local\POSCON\Radar Client and attaching the following files to your ticket:

Issue: If the Launcher Client is not running or your token failed to refresh, then you will see "NOT RECEIVING SURVEILLANCE DATA" and in the Messages View window, you will see the following error:

Issue: When Signing-In to a position, you see the following exception in the Messages View:

Issue: You Sign-In to a position and your VSCS is blank.

The Radar Client utilizes a dynamic zoom feature that allows users to display different maps based on zoom level. Currently, a user needs to manually configure the sector file in order to get this feature to work correctly. The following steps will go over the manual manipulation required. Please note that this is a temporary solution until a more automated system is developed:

The main limitation to this RANGE method is if you quickly want to change between airport configuration maps, then you will likely need to either edit the sector file to display the correct map or you can have multiple sector files with the RANGE values preset.

There are a few things worth noting about the first time you launch the Radar Client:

Make sure you are familiar with what the mouse buttons control:

In order for the voice communications system work properly, you must also configure your audio hardware in the Launcher Client.

There are different filters that can be applied to incoming messages. You can access these filters by clicking the "FILTER" button in the top-left hand corner of the window. This will open the Message Filter View: 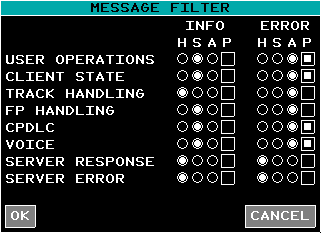 Info Messages - General information to the user
Error Messages - More severe messages, when something is wrong and needs the user's immediate attention.